Srikar Bharat Born in Visakhapatnam, Kona Srikar Bharat's journey has been nothing short of a bollywood movie. From a ball boy interacting with Indian bowler "Zaheer Khan" in 2004 to sharing the dressing room with the Indian pacer in the Indian Premier League, Srikar Bharat has come a long way. The talented wicket-keeper batsman holds the distinct record of being the first wicket-keeper to score a triple ton in Ranji Trophy. 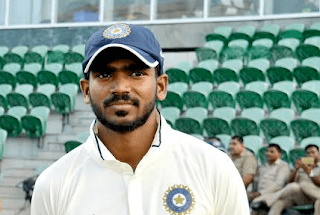 He make his First-class debut at the age of 19 against Kerala, Bharat has been one of the consistent run-scorer for Andhra in the last few seasons. He made rapid strides both as a keeper and as a batsman at the domestic level. 2014/15 was Bharat's breakthrough season where he scored 758 runs in Ranji at a healthy average of 54.14 which paved the way for him earning an IPL contract with Delhi Capitals.

Srikar Bharat has been in the selectors' radar for sometime now and if he can translate his form into some eye-catching performances, Srikar Bharat's surely a tempted to be reckoned with in the near future.